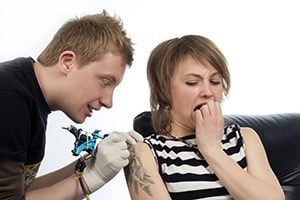 Adrienne Ballon is removing Rob Kardashian’s name from her right buttock according to the August 4, 2014 edition of US Weekly. Mr. Kardashian had already removed her name from his rib-cage.

What do you do if your spouse comes home one Saturday night sporting a tattoo of his favorite endangered species on his forehead?

Can you divorce him on the grounds that you would not have given him a second look had he been sporting a snail darter on his face when you first met?

In divorce law, one spouse’s post-marital ink is not grounds for divorce in Louisiana. If the tattoo is outrageous, it might be considered cruel treatment. Cruel treatment justifies one spouse’s decision to leave the marital domicile and can have consequences in a battle over alimony.

A tattoo can affect employability. If a parent undergoes a tattoo that results in his or her loss of employment, a court might refuse to reduce child support on the grounds that the tattoo’d parent was voluntarily underemployed. All couples, with children or not, should remember that their lives are not their own anymore. The use and misuse of their bodies have legal consequences.