No Marriage and no Giving in Marriage – Divorce After 50 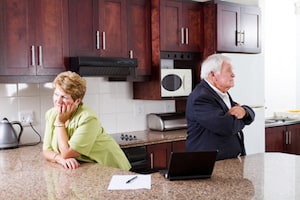 In response to questions by the Pharisees concerning who would be the husband of a woman who married multiple times once all were dead and in heaven, Jesus replied that in heaven there is no marriage and no giving in marriage. This may surprise some people who think that love is eternal whether you want it to be or not. However, it may be a relief for those who can endure this life with their spouse but not the next.

Some older couples are making sure it will not be a problem by acting in the here and now. According to The Advocate’s May 20, 2014 edition, the 50 and over divorce rate increased from 10% in 1990 to 25% in 2010. No matter what is driving the increase in divorce among couples who are older, such marriages present issues different from those presented by marriages of relatively short duration. Older couples often have no minor children and therefore no disputes involving custody or support. However, such couples have often accumulated a fair amount of wealth in the form of retirement benefits, cash savings, investments, and real estate.

As couples age and concerns over financial stability increase, fights about the division of property can be as acrimonious as those about children. Consult with a lawyer sooner rather than later about how best to prepare for the transition from married to divorced middle age.