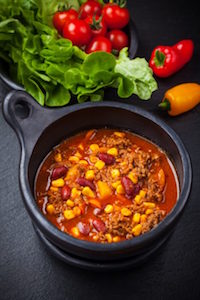 Three thousand people attended the 8th annual Louisiana Regional and State Chili Cook-Off at LSU in March 2014. What if one of the lucky winners is asked to sell their secret recipe for a large chilipot of cash?

In Louisiana, this possibility gives rise to numerous legal questions. Suppose that Mr. H. A. LaPeno obtained his winning recipe from his former wife, Cy Lantro. Ms. Lantro might contend that the recipe was her separate property having obtained it from her grandmother on the latter’s death bed as a gift.

In such circumstances, Ms. Lantro would need not only the advice of a lawyer specializing in the law of recipe copyrights and other types of “intellectual property” but also the advice of a lawyer with knowledge of Louisiana’s community property laws. Ultimately, the value of the chili recipe will determine whether it is worth the financial investment that Ms. Lantro will be required to make in order to fight about it. She may decide simply to eat and run.