What is that Courthouse We’re Racing to? The 23rd Judicial District 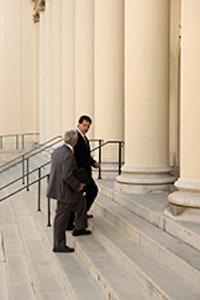 You may have heard the expression “the race to the courthouse”. It suggests that it is important to your success in litigation to get there first. Whether or not this is true in any given situation, most Louisiana residents have never been to one, except perhaps as prospective jurors. What is “the courthouse” anyway and what happens there?

Simply put, a courthouse is the place in which a court meets. Our state has hundreds of them. In Louisiana, there are many different kinds of courts and each type has the power or “subject matter jurisdiction” to hear particular types of disputes. If you are involved in a dispute involving divorce, custody, support or marital property, your case will be filed, in most cases, in what is called a “district court”.

Unlike some judicial districts, for example, Civil District Court in Orleans Parish and the Nineteenth Judicial District (encompassing East Baton Rouge Parish), the 23rd Judicial District does not have a special family court with specially elected family court judges to hear family matters. The 23rd Judicial District does, however, delegate the preliminary determination of requests for protective orders and child support to a person called a Hearing Officer. The Hearing Officer is not a judge but is authorized to make initial recommendations on those types of issues.

In most instances, including domestic matters, Louisiana litigants are entitled to ask a higher court to review a district judge’s decision. Sometimes there is the right to an appeal. For such reviews and appeals, litigants go to an appellate court. Louisiana has five courts of appeal – each one has jurisdiction over a specific geographical area of the state. Decisions rendered by the judges of the 23rd Judicial District are reviewed by the First Circuit Court of Appeal located in Baton Rouge near the state capitol building. In most cases, the Louisiana Supreme Court is the final opportunity for appellate review. Litigants who are unhappy with a court of appeal’s decision or with its refusal to review their case may petition the Louisiana Supreme court to do so. Only cases that satisfy certain criteria are reviewed by the Louisiana Supreme Court.

As your lawyer navigates you through the judicial system in your contested family matter, you should bear in mind that there is no perfect solution to your problems. Making the most out of what is a bad situation will require maturity, perseverance, and patience. You should usually take the long view – particularly where your children are concerned. Your race through the courthouse is sometimes better won as the tortoise than as the hare.